Following the reaction of Nigerians to a viral video of a hacker Ihebuzo Chris who alleged that he was in possession of data such as BVNs, and Account Numbers, of customers banking with Access Bank, the bank has reached out to assure it’s customers of the security of their accounts stating that ‘there is no security breach with customers banking details’.
Contrary to the claims of the supposed hacker, Access bank in a statement said, 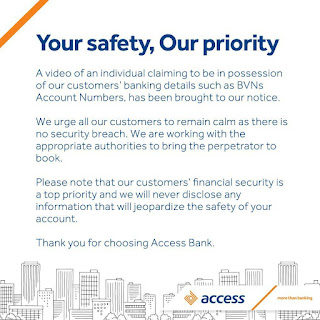 “ Your safety is our priority and we will never disclose any information that will result in loss of your funds.”
it stated that the bank is working with appropriate authorities to bring the perpetrator to book.

“ Please note that our customers financial security is a top priority, we will never disclose any information that will jeopardise the safety of your account”, the bank further affirmed. ”

The World Bank has expressed reservations about the Foreign Exchange measures rolled out by the Central Bank of Nigeria. The multilateral bank recently urged the CBN to intensify its efforts towards easing the pressure on the country’s FX market.

This was disclosed by the World Bank’s country director, Shubham Chaudhuri, via email to an inquiry by Bloomberg.

Chaudhuri said, “stronger action and a clear commitment from the CBN would go a long way towards facilitating a stronger recovery, despite its recent resumption of dollar sales to the BDCs after a 5-month suspension.”

Nigeria has been hit by a severe shortage of the greenback for several months, following the outbreak of the coronavirus pandemic and the crash of crude oil prices, which accounts for over 90% of the country’s foreign exchange earnings. The pandemic led to a lockdown of major economies globally including Nigeria, and very low foreign exchange inflow.

CBN suspended its weekly inter-bank foreign currency sales in March, in the face of depleting external reserves which were limiting the apex bank’s capacity to intervene in the Forex market.

The scarcity of dollars, which has been a major challenge, led to a backlog of about $2 billion forex demand by importers and foreign investors, who are looking to repatriate their funds. In a bid to stem this tide, defend the naira, and reduce the pressure on the country’s depleting external reserve, the CBN rolled out some measures to boost liquidity in the foreign exchange market.

However, stakeholders have complained that some of these measures from the apex bank are hurting their operations, and the capacity to repay their dollar-denominated debt.

Chaudhuri pointed out that a good example of that is the Azura Power Project in Edo state, which is partly financed by the International Finance Corporation (IFC) – the private lending arm of the World Bank. It is one of the many established local and foreign private firms that are having serious difficulty in assessing forex to meet their business and contractual obligations.

It was reported earlier in the week that this might cause the Azura Power Plant to default in its dollar-denominated debt.

The Central Bank of Nigeria has set December 31, 2024 exit date for its intervention loans to the Small and Medium Enterprises and households aimed at cushioning the effects of coronavirus on businesses and the people.

It also gave December 31, 2030 as the exit date for the COVID-19 intervention funds for the pharmaceutical sector in its guidelines for the funds.

Recently, the banking regulator disclosed a combined N150bn intervention fund to ease the impact of the pandemic on some sectors.

Vice President Yemi Osinbajo on Tuesday in Abuja held an online meeting with representatives of the International Monetary Fund (IMF) and the World Bank.

The meeting, anchored via videoconferencing from the Presidential Villa, deliberated on how the agencies could collaborate with Nigeria in the planned additional economic stimulus packages to address the fallout of COVID-19 pandemic.

President Muhammadu Buhari, on March 30, set up the Economic Sustainability Committee(ESC) headed by the vice president to develop an economic sustainability plan until 2023.

The committee was tasked with identifying fiscal and monetary measures to enhance oil and non-oil revenues in order to fund the plan; develop a stimulus package and come up with measures to create more jobs while keeping existing ones.

The ESC had expressed optimism that with the plans it had drawn, Nigeria would be able to return to positive growth by next year. You Have Taken Shame Away From Us, We’ll Ensure Your Reelection, Udaba Residents Assure Obaseki